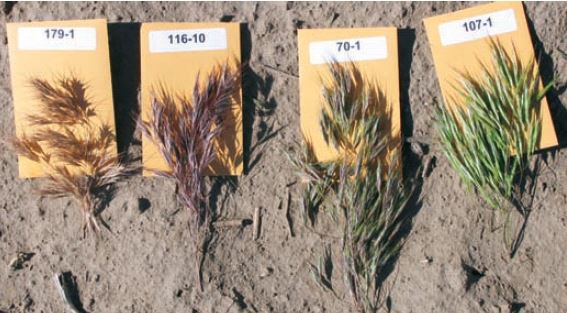 Downy brome genetics and its projected development under climate change

Issue: Within the small-grain production region of the Pacific Northwest (PNW), downy brome is a ubiquitous and competitive weed. Changing climate may impact the timing of crop-weed competition and  the window for when weed-control inputs are effective.

Action taken: We employed a genotype-by-sequencing approach to call molecular markers, generate population genetic statistics, and classify downy brome accessions into genetically similar clusters. We also transplanted accessions into three common garden field sites to document and model the timing of their development. We modeled the timing of development stages against cumulative growing degree days to develop herbicide application thresholds to aid in control of downy brome within small-grain fields.

We later initiated greenhouse experiments to characterize the responses of early-, intermediate-, and late-to-flower downy brome accessions to various vernalization treatments and quantify the expression of Brachypodium distachyon gene vernalization 1 (BdVRN1). Downscaled climate modeling was paired with global climate change models to project downy brome development thresholds under future climate scenarios based upon the results of our field and greenhouse experiments.

Results: We identified six genetic clusters of downy brome across the PNW using 384 single-nucleotide polymorphisms and the discriminant analysis of principal components clustering approach. The estimate for mature seed production varied from May 18 to June 20 depending upon the location of the common garden. Earlier production of mature seed was observed following more-severe winters compared to mild winters, implying a role for vernalization in regulating the timing of development. Downy brome flowering in response to vernalization treatmentswas linked to the expression of BdVRN1, implying the molecular controls of flowering in downy brome are similar to the controls in other temperate grass species.

Under all future climate scenarios, downy brome development is anticipated to advance 16 to 34 days across the small-grain production region of the PNW. Downy brome is likely to remain a severe pest well into the next century, and the changing climate may complicate control efforts. The earlier development of downy brome will require earlier control inputs, which may conflict with earlier rainfall projected under future-climate scenarios.