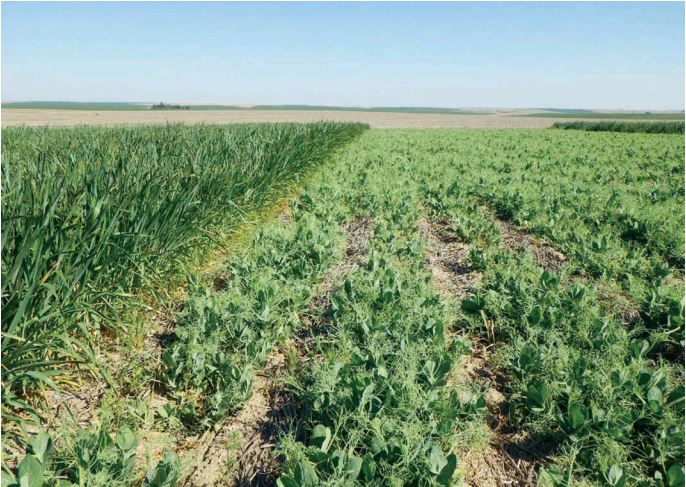 Winter pea (right) and winter wheat (left) in early May at the test site in Ritzville, WA. Photo by Bill Schillinger.

Issue: The wheat monoculture farming predominant in the inland Pacific Northwest has led to environmental, economic, and soil-quality problems. Crop rotation using legumes reduces fertilizer nitrogen use, diversifies the biology of crop rotations, and allows farmers to control troublesome winter annual grass weeds. Some crop diversification has been implemented using cool-season legumes in the high-rainfall zone of the region, but options are more limited in the lower-rainfall zones.

Action taken: We conducted studies of spring peas in highand intermediate-rainfall zones in Pullman, WA, and Davenport, WA, to determine the extent of biological nitrogen fixation. In addition, we introduced winter peas into a long-term crop rotation study in the low-rainfall zone at Ritzville, WA, where the winter wheat–summer fallow rotation has dominated for 135 years.

Results: Spring peas in Pullman biologically fixed most of their plant N, while fixation was not as dominant at Davenport, where the peas were more reliant on residual soil nitrogen supplies. This suggests that pea inoculation is critical where fields have had no previous history of legume production. At Ritzville, winter peas have produced high yields, fixed nitrogen, and shown good overwinter hardiness, likely because the shoot meristem remains below ground, as in wheat, and benefits from soil insulation against freezing winter temperatures. Winter peas offer a viable crop rotation option for this traditional wheat–fallow region. In the past five years, farm planting of winter peas has gone from zero to more than 10,000 acres. This trend is expected to grow as farmers gain experience and confidence in winter pea production. 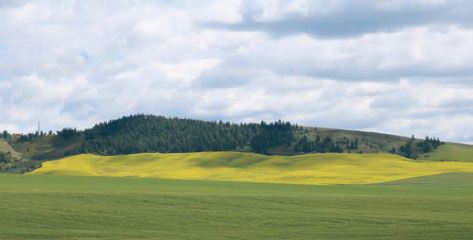 Canola on a Palouse hillside adjacent to field sections of wheat. Photo by K. Sowers.

Issue: Dryland farming in the inland Pacific Northwest (PNW) is largely monocultural. Producers grow wheat, with some limited integration of cool-season legumes in the high-rainfall zone only. Canola has been identified as a prime candidate for diversifying and improving the sustainability of wheat-based cropping systems in the region, and it would also mitigate climate change by providing biodiesel feedstock in place of fossil fuels and improving nitrogen cycling and nitrogen use efficiency (yield per nitrogen supply). However, little information was available on spring canola’s nitrogen fertilization requirements or on the nitrogen requirements of rotations including canola.

Also, while it is recognized that water drives wheat nitrogen use efficiency (yield per nitrogen supply) in the region, we had only a rudimentary understanding of how water influences the plant and soil components of single crop and rotational nitrogen use efficiency. In addition, predictive methods and nitrogen management recommendations needed to be updated to reflect new crops and rotations as the climate changes.

Action taken: We conducted a seven-year field experiment (2007 to 2014) in intermediate- and high-precipitation zones of the inland PNW to define spring canola and rotational nitrogen requirements as influenced by water availability. We also conducted controlled rhizosphere experiments to illustrate how the differences in root and shoot morphology between wheat and canola necessitate a change in nitrogen placement, form, and timing strategy when adapting wheat-based farming technology to canola production.

Results: We developed new nitrogen recommendations for inland PNW canola production. Our study illustrated the importance of nitrogen fertilizer carryover and subsequent uptake by spring wheat and spring pea and by winter wheat in three-yearrotations. In addition, our study revealed potential damage to canola seedlings from conventional wheat planting and fertilization equipment and fertilizer placement strategies.

Furthermore, we developed methodology for assessing rotational water- and nitrogen-use efficiencies across whole crop sequences, as opposed to the more typical single crop assessment, and tested it on these and other regional rotational data. The basic methodology is being applied across REACCH study sites to evaluate relative rotation nitrogen and water-use efficiencies of conventional and alternative rotations across the REACCH region.

Our results form the basis for several upcoming extension grower guides on canola nitrogen management, leading to improved cropping system nitrogen use efficiency and a reduced nitrogen footprint for the inland PNW.

Canola production has increased in WA from 7,000 acres in 2008 to 31,000 to 54,000 acres in the period 2014 to 2016, with similar increases throughout the inland PNW. We sustained the activities of a stakeholder network that includes research and extension faculty, students, seed and chemical suppliers, financial institutions, government agencies, farmers, and experts in grain storage, processing, and marketing. This network has assured oilseed-processing industry investment in the region, represented by oilseed processing plants established at Warden and Odessa, WA, which ensures local markets and the overall sustainability of the WA oilseed movement and value-added industries. Viterra, an international marketer and handler of grains and oilseeds, encouraged by the efforts and progress of this oilseed network, has a supply and marketing agreement with the Warden facility and has begun to pursue an aggressive business plan to crush over 1,100 metric tons of seed per day to be processed into biodiesel and various grades of food-grade canola oil from locally grown canola. In parallel, plans are being made to convert the Odessa plant into a camelina processing facility for food and industrial oil production. 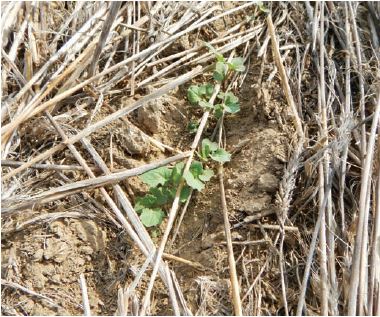 Winter canola seedling emerging from under a thick layer of winter triticale residue.

Issue: Growers in the low-rainfall production zone of the inland Pacific Northwest have few crop-rotation options that are both economically and environmentally sustainable.

Action taken: We evaluated no-till winter triticale and winter canola as alternative crops for the low-rainfall zone at Ralston, WA.

Winter canola is seeded at a shallower depth than winter cereal crops, meaning that soil moisture must be closer to the soil surface to support germination of the canola seed. At Ralston, increased seed-zone soil moisture in the high-residue no-till system led to greater establishment of winter canola when compared to the drier seed zone in reduced-till fallow.