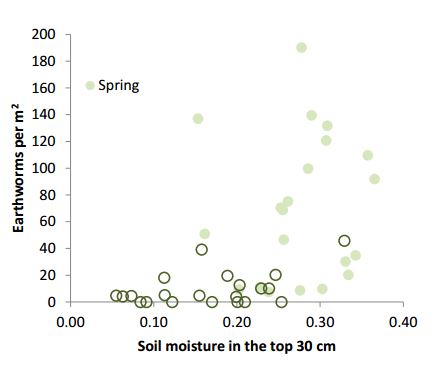 Issue: Earthworms are important indicators of soil health, a concept that is being widely promoted by the U.S. Department of Agriculture. Earthworms improve water retention in soils, which is important for dryland systems under predicted future climate scenarios. Greater knowledge of earthworm species and population densities is needed before farmers can manage for these important organisms and optimum soil health.

Results: Earthworms are not found in areas where mean annual precipitation is below 330 millimeters. This is significant for predicting shifts in earthworm density under expected climate change and indicates climate change could have a detrimental effect on soil health in the future. Measured earthworm biomass values (94.3 grams per square meter) are generally high enough to benefit crop yields. For the first time, we believe we can provide farmers with reasonable targets for earthworm management. We have a better understanding of which species will survive under expected climate change. This understanding will help to inform management decisions regarding earthworm inoculation, a practice of increased interest to growers.